It has been a while since I have had  ….. well, frankly wanted to write anything. Once I returned from Norway, things have not exactly been going as planned.

I can’t even say I am ready to talk about all that has gone on. Lets just say I am still trying to gather all my thoughts.

So, instead, I am just going to talk about my amazing trip through Europe. Starting with my awful debacle in Paris ;/

You know, I have been pretty darn lucky in the world traveling side of life. As I flip through my passport I found stamps from Brazil, Norway, Sweden, England, Germany, France, Finland, Spain, Scotland, and even Japan.

For someone who did not see Chicago for the first time until she was 18, that’s not a bad record for the last 6 years. I also quickly realized how different it is to travel with a team compared to individually.

Gosh have I been spoiled.

It is a whole different ball game when you’re the one booking your own flights, trying to have one country travel plans coincide with the next, and yes, most importantly, keeping it at a reasonable price (that’s the kicker).

The reason I found myself even considering this European adventure was because of three main reasons:

1)    My Norwegian team didn’t make the finals, so I had a week in a half of time to hangout before I went back state side

2)    I had a pair of amazing friends in Barcelona and Germany that I wanted to see.

Folks I am not kidding, I flew from Oslo to Paris to Barcelona to Munich, and back to Oslo for 117 American dollars. Not a typo, trust me my brother even had to call the airline because he did not believe me when I told him the price.

Once I saw that price, I knew it was my duty to travel for all my fellow Americans! Ha

Paris, France – aka the Nightmare

The “City of Lights” or as I call it, “The City of WWWWUUUUUVVVV.” I know what you’re thinking, why in the heck would I want to head there alone?!?

It’s actually pretty simple – the kicker about RyanAir is that they only fly into certain cities. For instance, I couldn’t fly straight from Oslo to Barce. Had to head to either England or France before I could reach there.

After doing some research, I happened to find a family friend that lived in Paris, France it was. Would you turn down the love capital, The Eiffel tower, and some of the best chocolate in the world?!? Exactly!

With only having a week to travel, my timetable in each city was pretty short. i.e. – I was in Paris for a whole 36 hours.

Everything started out perfect. I landed in the morning, found my way to meet my family friend, and even got a quick tour before it was dark. The weather was quite a bit warmer than Norway, which got me excited to see the city the next day.  Being mid-November, I was surprised that it was not absolutely miserable outside. Then again I did just come from Norway where it was literally the Siberian tundra! Ha

Anyways, I crashed pretty early knowing that the next day I had exactly 6 hours to see the “hot” spots of Paris. I could see the Eiffel tower outside my guest window, had a bike raring to go, and the map studied/conquered for a perfect route to get me around the city.

Bright and early I am off on my first solo adventure. Money, camera, map, and bike – check, check, and check. The first 7 minutes of my bike ride were splendid. The tower was on the horizon and the cool fall air was delightful……….. Then BAM, flat tire ;/

I could have turned around and headed back up to find a pump at the apartment OR just fill up at the gas station down the block. In the US I do that all the time  – should work here right?!?

BEFORE I CONTINUE, I must tell you that none of this is made up. The timing, stupidity, and stubbornness is 100% me . . . . Unfortunately

I pull into the gas station and start trying to fill my tire. As I push down on the air gage, my tire started to instantly lose air. I tried to pull it off but it was too late, my tire was completely flat. It turns out that this particular bike had a new and improved valve that actually needed a special attachment to fill it correctly.

I immediately go to the gas attendant and ask for some help. I think he understands what I am saying and points in the direction of a red yawning, a bike shop right?!? Nope, it turns out to be an appliance shop that was closed. With time dwindling down and the Eiffel tower a loooooong block away, I figure I can go there, and then look for a bike shop.

I have not only managed to walk around in a huge circle around the Eiffel tower but it conveniently started to pour rain. Not the nice sprinkle kind, the kind that pierces your body with the sideway sting. Every darn person that I asked for help sent me to either a gas station or an actual bike renting automatic center.

Needless to say, 5 hours passed of me walking around Paris with my handy bike at my side. My dream of seeing this beautiful city was short lived. Hands frozen, body shivering, and frustration in full swing I head back to my friends apartment. The only good news was that I did actually get to climb up the 780 steps of the Eiffel tower – the view was amazing.

one of the many streets i wondered around in Paris

In the end I realize there are many “what ifs” in this story. I mean who would of guessed that there were NO bike shops in Paris? Or that I would let out all the air of my tire and instead of doing the simple thing of heading back to the apartment I decided to try it out for myself.

At least I had the chance to try their famous hot chocolate and a Éclair. My mouth is watering now thinking about how yummay that was! It even ALMOST made the pain in my frozen hands disappear.

This might be my favorite place I have visited so far in this vast world. I got to spend 2 ½ days there and was blown away. My good friend/teammate Vero took me all over. We covered the Barce stadium, the Olympic campus, Sagrada’s and Gaudi churches, Vero’s favorite restaurant (OMG yal, the food was so amazing, would fly back just for another taste.), and of course the coast line.

The first day was my favorite. We went to Las Ramblas, the famous street of Barce.  From the numerous street vendors to the amazing street performers, my mind was blown away

Vero and me up at the Olympic training grounds

From my pictures below you can see the Barce number one fan and another street performer. I literally crawled under this man to see how he was staying up and there was nothing there! He must have the strongest arm in the world! I still have no idea how in the heck he pulled that off. 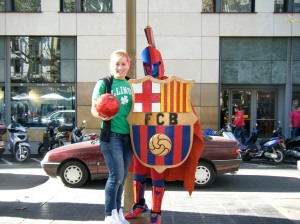 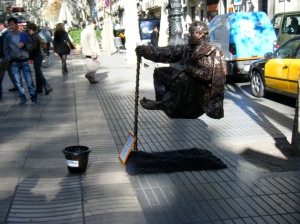 After that we went to the famous St. Joseph Mercat. It was so incredible. I mean the market was endless with everything. They had snails, ostrich eggs (which are massive), Negro ham, etc.  I still don’t know what the big deal is with this particular ham, but with the picture you can see it is a good 100 US dollars more expensive, WTH (heck). 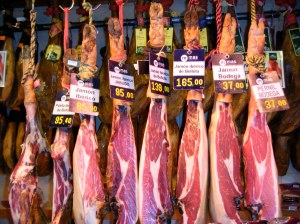 notice the difference in prices from the middle two?! 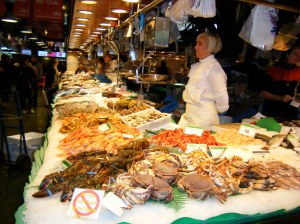 I also was lucky enough to get a practice in with her team, Espanyol, that night. They practiced late (9 pm to 11pm) and my first impression was a bit low. The players that I saw first were a bit bigger than most. That, of course, gave me false confidence because I was quickly reminded that they were professionals as well. The things those girls could do with a ball was crazy. Every single one was doing this trick or another. My biggest accomplishment was only getting megged once that night…. Gosh were they good!

To many of you Chicagoans the name Trent Meacham will mean nothing to you, yet if I said his name in Champaign, people might head into frenzy. He is a good friend of mine that I have known since we played soccer together around 8 years old. He is now an ex Illinois Basketball player and professional player in Germany.

He is one of the best men I know. Talk about a God fearing, humble, and hard working human being. I didn’t think I could meet someone more impressive until I met his wife, Theresa. She is just as incredible as him and supposedly could of made it quite easily in the WBNA, just a beast ha.

Anyways, I had the pleasure of getting close to them over the last couple of years and was happy to make them my last stop of my adventure. After a 45-minute bus ride to downtown Munich and then another 2-hour train ride I arrived in their very quaint and gorgeous new home.

A view from their apartment window

It pretty much was two great days of seeing some family. With being gone for two months, it felt so refreshing to see some familiar faces, and be able to see what their life is all about over seas.

Overall, I could not of asked for a better trip. I got to see some very dear friends and what a day in their life looks like. I’d have to say that my biggest shock was the differences in the culture. For example I came from a country (Norway) where they are up at sunlight and home by sunset, working every minute of the day. To Barcelona where nothing opens until 10, then closes from 1 to 4 for some good old wine drinking/eating, and then reopening until 10 pm. I would definitely say that the Spaniards know how to enjoy life.

With my schedule I can easily find myself having the days run together, especially with pre pre season training. Most of my days consist of a morning workout of running, boxing, or some technical work. Then after lunch I have a harder workout of either lifting or playing. Not sure how it’s possible, but feel like I have no time to myself in these days. Yet, at the same time I would not change it if I could.

I realize that my off season training is built on this philosophy:

Off-season is where the blood, sweat, tears and fears are shown, where the champions are made. Season is the time where you finally get to sit back and enjoy the ride.

Yep, just made that one up. Til next time folks.