I am going to blame this on the jet lag but all I can think about right now is, “half way there, ohhhh oh, living on prayer…” That puts the first half of our season into perspective ha.

Even though we have been here for 7 months, we are now officially half way, with finishing in November. I think the best way for me to describe me on the pitch so far is this…

That was posted by my friend Ms. Carli Lloyd. Now her and I might be fighting for different things but I think it all comes down to respect, respect for our craft, and something we have dedicated our whole lives too. Granted, she could probably fund my career with her Nike contract alone ha, we have both made sacrifices that only our “inner” circle will ever truly understand.

I say that because a couple weeks ago I was approached by a reporter who said (give or take), “Do you have anything to say to those people who said that you were only picked by Rosengard because you were Erin’s wife?!”

At first, I was angry, then I was proud. I mean my wife must be a pretty big deal for a top 5 team in Europe to sign me to a two year contract just because “I am her wife” and don’t forget that that means year round pay ;p

I get it, I have no ego with admitting my wife is a bigger deal than me, but here is the truth of the matter.

And that 3k is before taxes and includes the money needed for paying rent, making my car payment, cell phone, groceries, etc …

I don’t mean that in a way where I am not thankful for being a Pro, but I disagree with the NWSL on how we had NO negotiating rights to our contract. Meaning that when I signed my rookie year I was locked in for as long as ‘they’ saw fit.

Every year it was a one year plus one year with a 5% increase of pay, no matter what. I had no rights to say IF i wanted to leave a team or stay. Oh and don’t forget we only get paid for 6 months but get told what, where, and when we can play for 12.

Malmo needed a defender. So when I came in September for my tryout, that was the position they saw me at. However, after an injury to a forward, I was moved up top and took full advantage of it. (10 goals, 4 assists, in 13 games)

Yes, I was sad to leave Houston, especially when I was so invested in the team and really believed in the girls around me. However, after 6 years Pro in the states, I realized that I would rather try and fail in Europe or simply be just a wife than to play in the states where the NWSL has made a living of making non US players feel unwanted, replaceable, and unstable.

It was simply too much. It was too much for me to be a part of a league where the  US national team players seem to be the ONLY focus. Where 16 players, give or take, on each team get over looked continually when they should be getting incredible praise for keeping the league alive!

Don’t get me wrong. I completly understand how important the national team girls are to the fans, but you can’t use the statement, “they put fans in the seats.”

You can’t say that as you see Portland pull  in 17k plus with not one national team girl on the pitch.

You can’t say that because the clubs choose to focus on them for media coverage compared to the inspirational stories of so many others that stand in front of them.

We all know that maybe 5 of the NT players change crowds by the hundreds… the rest… well lets just say I have been mistaken at least 5 times for Meghan Klingenberg ha. I mean, I’ll take the compliment, but come on, my bangs make up her hair ha. #thickhairmatters

Again, I am not taking away from the US players, because honestly it is not their fault.

They are put there because of the ideology of many of the clubs, when now, with being away, I see that it can be such a different way.

Now I see, how ALL over the world, leagues have been successful having the club be on the same level as national team. Where you have to be there to earn your right, where only international breaks is when the NT girls are gone, and where club training is just as respectable as the national team.

Not because of the price behind it, but because of the women that we call teammates. The women standing shoulder to shoulder,with you, who are getting paid 6k for 6 months but choose to sacrifice everything to have the opportunity to tie up their laces with their name on the back of a Professional jersey…

To so many, that is their dream, and they would do absolutely anything for them to live it.

I mean who wouldn’t?!

I will end with this.

FC Rosengard is by far the most professional club I have ever played for and it has nothing to do with the BIG gestures (ex stadiums) but because of the little ones. It is because they believe in the details a full time Physio who believes its his honour to help us out, who wants to be there and has years of experience, a full time massage therapist, a gym membership, a locker room at our field, our laundry washed, and in an environment where it’s not just about 1 or 2 players, but a roster of 18 who believes in the team first not the name on the back.

It is because we have a coach, an assistant coach, a GM, etc who shows up before us and leaves  way after us. A coach who believes in the group over an individual and takes the time to treat us as the same as the men’s Pro team he coached before.

NWSL does matter for the generations to come, but maybe, maybe the little things (gestures, people) will finally start to matter so it CAN be a league that is an honour to play FOR not just with. 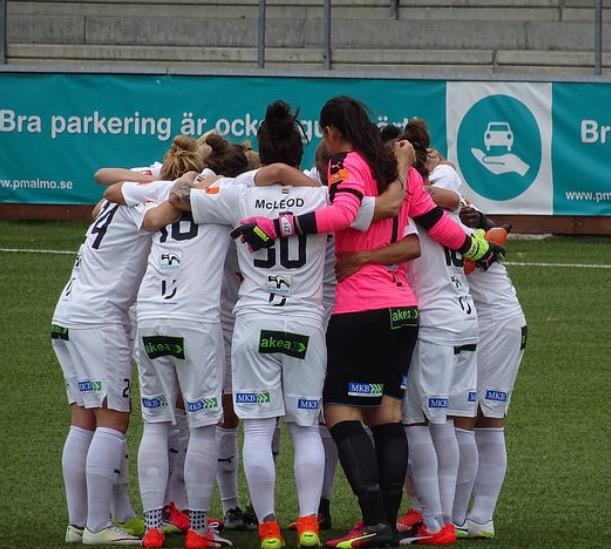 Come join me on this incredible journey of being a Professional Athlete. I never imagined that after spending my first 22 years of my life in Champaign-Urbana, I would be able to call places like France, Sweden, Norway, and even Canada my home. This blog will be my insight, on arguably, my last two years of my Professional journey. It will be filled with the joys and pains of this life style. I will be honest and hold nothing back. I hope we all enjoy the ride and cheers to the next 730 days... View all posts by Ella Masar